You are here: Home / BLOG / The one with Sakurasou No PET Na Kanojo.

The one with Sakurasou No PET Na Kanojo. 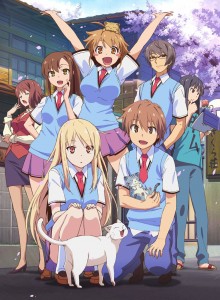 After another long hiatus from Japanese media (not due to hate mind you, just other media taking up my time), I finally sat down and started watching a few shows at random last winter. I even read a few manga to get a preview of what to expect from the anime, but of course, I couldn’t very well read Sakurasou No PET Na Kanojo since it’s based on a RAINOBE. That didn’t stop me from trying to watch it on Crunchyroll as one of the random anime I started last winter. Unfortunately, I couldn’t really get into it, but I kept watching here and there to pass the time at my new job where I didn’t know anybody and I spent lots of alone time during lunch.

The KYARA designs were really nice, and while it was seriously funny (now that’s an oxymoron), the story was a bit lacking. Still, I pressed on because I was busy trying to finish a manga for Sukitte Ii Na Yo., which I had on pause. 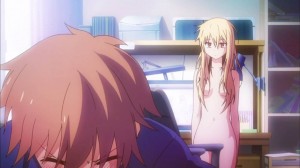 You would think this sort of fan service would be nonsensical, but it actually aligns with Mashiro's character quirks and is quite funny.

After going through some issues with my media center and stress at work, I sat down and spent some time doing a marathon of the series (thank goodness for the CR app on PS3). Lo and behold, the show really hit its stride partway through the first half of the season, and the characters were given some great development. It got slightly less funny halfway through, but still enough to make me actually LOL in real life. I was all choked up at the end, and I was one of the many commenters on CR clamoring for a second season.

I highly recommend it!

Believe in Mashiro, who will believe in pantsu.

It’s been a while since I last used this format for my blog posts (e.g. the Friends style title and KERORO Gunsou closing statement), so I thought it would be fun to bring it back for nostalgia’s sake.

The one with all the Lesson Reviews.

I’ve been trying to figure out what to do with this blog ever since I started using Hummingbird last fall. So, I decided to try an idea of mine called Lesson Reviews. Essentially, it’s more of a “what I learned from X anime” than a review, but the thing is, there will be good and […]

Y has been hooked on anime since the mid-nineties, expanding his interests after the new millennium into other pop culture (POPUKARU) media including manga, ongaku, movies, zasshi, and terebi. After taking a 2 year hiatus in 2009 to restructure his finances (i.e. get out of otaku instigated debt, shiku shiku), Y is back and ready consume POPUKARU media at a leisurely pace. [Read More …]

Guess what? This blog is not safe for work! In fact, it may not even be safe for children or people that are sensitive to mature content. By mature, I mean female nudity. So, be forewarned; know and obey the extent of the law in your country, state, or province. In other words, leave this website immediately if you're not supposed to be here and don't hold me liable if you see something you don't like.